Posted by The Peoples Underground at 11:32 PM No comments:

History of Iran & USA in 10 min, Every American must watch this!!

Posted by The Peoples Underground at 2:08 PM No comments:

The victor of the special election in South Carolina for the states first congressional district has been named. The AP has just reported that the former governor who disappeared while having an affair has beat Stephen Colbert sister, Elizabeth Colbert Busch for the house seat. This comes as a shock to anyone who thought that over the top scandal would end Mark Sanford's political career.


http://youtu.be/mery0MP1mJ8
Posted by The Peoples Underground at 5:57 PM No comments:

Israel has recently bombed Syria. This new escalation will probably change the way many people think about the Syrian conflict. Israel's bombing of Syria has been condemned by Egypt and the Arab league. New hatred toward Israel is sure to increase after this bombing in the Arab world. Already Israel is increasingly being viewed as a pariah state to the rest of the world. This recent bombing will hopefully encourage more divestment from illegal Israeli settlements. Just this month the U.C. system voted to divest from all construction projects currently building illegal settlements in Palestine. If there is one thing we can predict for the future of world politics it is this. Nothing ever stays the same.

Posted by The Peoples Underground at 2:49 PM No comments:

Well it looks like Obama is dead set against having any type of legacy as a progressive. Pretty 'no shit' facts like some teens won't be able to get birth control don't seem to matter to our president and woman's rights champion. (I hope you see the sarcasm)  Letting woman choose what they do with their bodies appears too liberal for Obama.

Some teens are too embarrassed to tell their folks about their sexual escapades, some have math tests the next day that prevent them from taking a bus to planned parenthood. Some teens are raised by uber religious zealots who will force them to have an unwanted baby! Many schools are required to give young male students condoms if they choose to ask for it. Why are male student given birth control for free but females not? Why has next to no funding for male birth control been given to scientists throughout our countries history? Males are not the ones sentenced to 9 months of pregnancy yet we deny equal access to the little birth control option that exist for woman. It's sexism, its ignorance and it will bring more unwanted children. The FDA has said no scientific evidence exists proving the morning after pill should not be available as an over the counter drug, so please do not think that science or logic has anything to do with Obama's position.

For everyone who doesn't have their head in the sand the common fact that teens are having sex younger and younger is a commonly accepted truth. Many females I personally know lost their virginity at or near the age of 14! The reality is we live in a culture were guns are ok and sex isn't. You can practices murdering people all day long in front of the X box but even though your sexually active you better ask your parents if you can have birth control should you be unlucky enough to be born a woman. If you were born a man just walk to your elementary school health office! No questions will be asked! 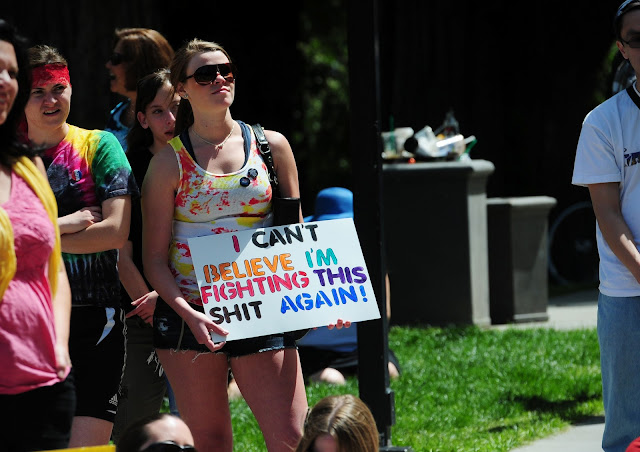 Posted by The Peoples Underground at 5:50 PM No comments: